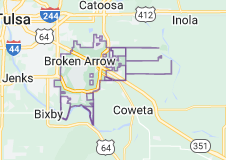 Broken Arrow is a city located in the northeastern part of the U.S. state of Oklahoma, primarily in Tulsa County, and western Wagoner County. It is the largest suburb of Tulsa. According to the 2010 census, Broken Arrow has a population of 98,850 residents and is the fourth-largest city in the state.